Most entries below contain actual legal discussions of events directly related to Filipinos in or immigrating to the United States.
Remember- These writings are provided for general information only and do not constitute legal advice, nor do they create any attorney-client relationship. Each person's needs and requirements are different and require a personal evaluation to determine the proper legal course of action.

I recently saw this issue raised on an attorney email list.  The question is asked frequently and anyone who gets permanent residence based on an employer petition should understand this concept.

There is no exact number of days/months/years that an Employment-based immigrant must work for the petitioning employer.  The answer is a combination of your initial intent and any circumstances that have changed since becoming a permanent resident.

On the day you become a Permanent Resident, you and your employer are agreeing to establish a "permanent" employment relationship.


It must be your intent on that day to remain with the petitioning company for the foreseeable future.

You must not already be planning to quit in the near future.  If you do not have this “permanent” intent to continue working on the day you are granted residence,  USCIS may say you were not living up to your agreement that allowed you to become a permanent resident.  Past employment with this same company does not count.  You may have worked for them for many years as an H-1B or L-1, but it is your intent when granted residence that matters.

Of course, you should also always keep in mind that your employer has expended considerable time and effort towards your desire to become a Permanent Resident, and they are relying on your promise to work for them in the future.  If USCIS later finds that this was not your intent, your Permanent Resident status can be removed.


However, “permanent” does not mean forever.  Should an event occur after you become a Permanent Resident that would commonly cause a worker to change employers, such as a substantially better job offer, spouse relocation or unbearable working conditions, you can leave your position.  But if you do leave your job within the first two years, I strongly recommend you document the reasons that led to your departure and collect any evidence that may be available showing that the event causing you to terminate employment occurred after you received Permanent Residence.  This evidence will be very useful should you later need to defend against an immigration fraud allegation many year after you left employment.

These cases usually after an employer complains to USCIS about an employee quitting, or when a USCIS officer questions the short employment history with the petitioning employer when applying for U.S. Citizenship.

Although somewhat uncommon, USCIS will take action if they believe they can prove fraud was committed.  If discovered within five years of the grant of Permanent Residence, USCIS may directly remove residence through Rescission proceedings.  If more than five years has elapsed, the government is required to place the worker in Removal (deportation) proceedings.

It is much better to understand this requirement at the beginning of your Permanent Residence than to be one of the unlucky ones who learn these rules in removal proceedings!

On March 13, I had the privilege of touring portions of the U.S. Embassy in Manila.  It is unfortunate that the embassy grounds are not normally open for tours.  The property, built on land reclaimed from Manila Bay in the 1930s, is the site of many historical events.

In addition to the grounds and chancery building, an hour was spent in the new Annex building which houses a variety of consular services, including visa issuance.  Opened in 2011, the Annex has over 99 service windows and provides a clean and comfortable waiting area capable of seating over 500 applicants.  There is even a children’s play area (designed and supported by embassy staff).  Obviously, a great improvement over the old visa complex.

Part of the tour included a simulated walkthrough of the entire visa issuance process, starting with entry into the compound and finishing at the last window where a decision is made.  Whenever I have the opportunity to visit an embassy, alone or with a client, I come away with a better understanding of the visa applicant experience.

And on this trip, I also came away with a colorful hat! 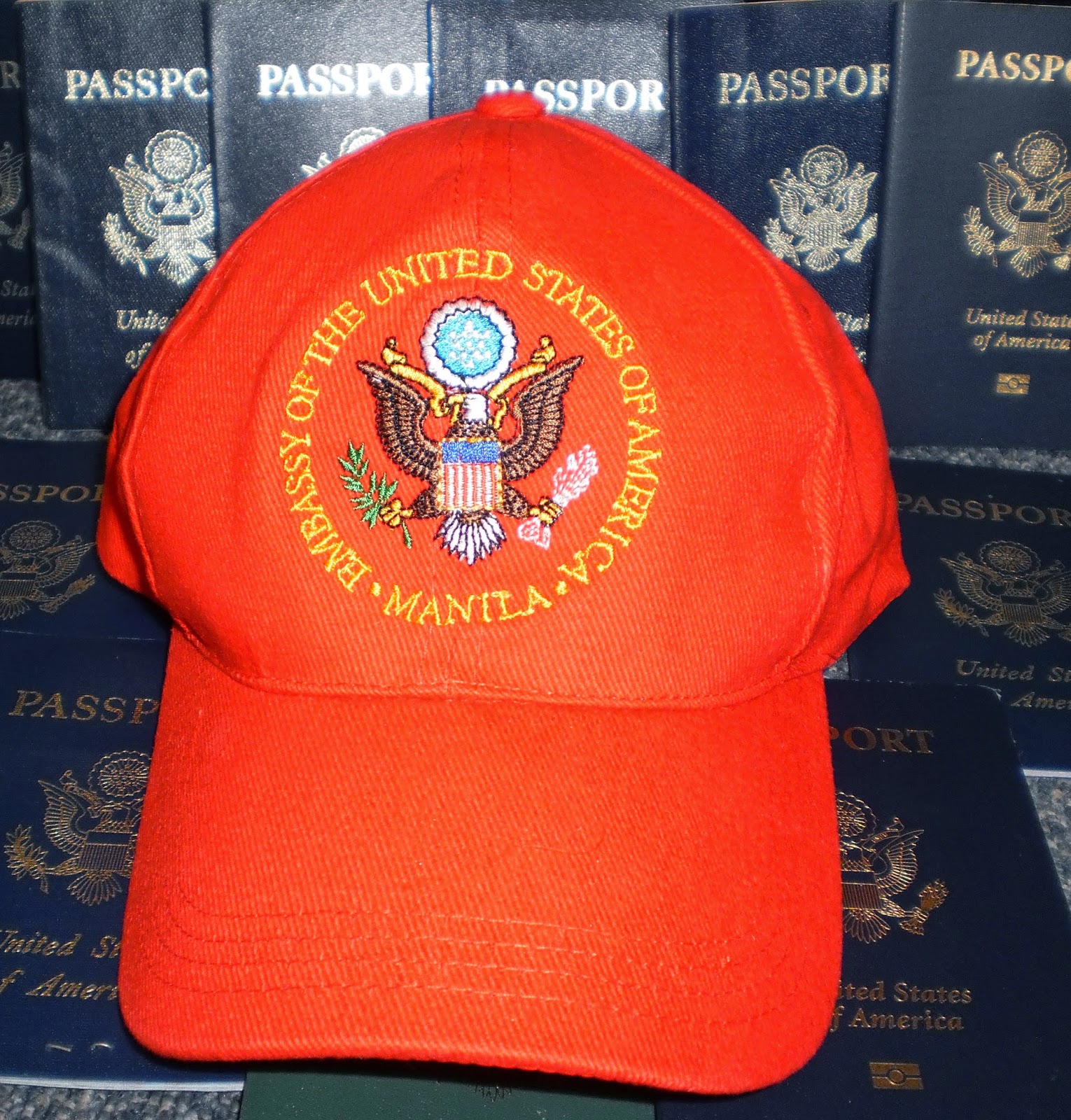 Beginning May 1st, the cutoff date for Employment-based 3rd preference (EB-3 Philippines) will be rolled back to July 1, 2007 – a substantial set back from the April cutoff date of October 1, 2014.  This retrogression of cutoff dates means that beginning on May 1st, immigrant visas will only be available to persons with a priority date earlier than July 1, 2007.  The period of retrogression is expected to last through the summer, and possibly very much longer.

If you find any of these terms confusing, you may wish to review Basics and Tips for Understanding the Visa Bulletin.

For anyone who has been watching the Visa Bulletin for the last year, retrogression comes as no surprise.  The cutoff date for EB-3 Philippines has advanced 29 months since November, and almost seven years in the last 12 months.

If your priority date became current in the last year and you filed for permanent residence, you will not be harmed.  Although you will not be granted Permanent Residence until your priority date is current again, you will continue to be eligible for employment authorization.  Having a Permanent Residence application pending is usually much better than continually renewing your H-1B/H-4s.  Also, for those whose application for residence are still pending, do not be too disappointed by this set back.  Remember, it was the exceptionally rapid cut off date advancement that gave you the opportunity to file early for Permanent Residence in the first place.

If your priority date is earlier than October 1, 2014, and you have not filed for Permanent Residence, file quickly.  Properly filed I-485s received by USCIS on or before April 30th will still be accepted.

Unlike those applicants in the U.S. who already filed for Permanent Residence and are allowed to remain with work permission, retrogression is especially harsh for those waiting outside of the U.S. to consular process.  The rapid advancement of cutoff dates create a false belief that their wait for an immigrant visa will be short.  Unfortunately, that may not be the case.  For immigrant cases still at the National Visa Center, or cases yet to be started, the wait may now be lengthy.

Special Actions by DOS and USCIS


The Department of State and USCIS will sometimes take special actions when notified of a pending retrogression for a particular country.
The U.S. Embassy in Manila has already announced a plan to approve as many EB-3 cases as possible before May 1st.  This includes allowing applicants with interview-ready cases to appear at the embassy without an appointment to try to finalize their immigrant visas.  The instructions for walk-in applicants, and other useful information, can be found in this press release.

USCIS has also been known to sometimes give special treatment to certain Permanent Resident cases prior to a retrogression.  When workloads permit, some older Philippine EB-3 cases in line to be processed may be given slight preference for final action.  Today I received a Filipino EB3-based Adjustment approval that was not expected for another one or two months.  I’m hoping this is a sign of more approvals to come in the next two weeks.


I normally only post original writings, but for this I will make an exception.

Below are the USCIS H-4 EAD filing instructions that will later appear in, “Instructions for I-765, Application for Employment Authorization”.


Although USCIS has not formally published these instructions or the new I-765 to be used for H4 EADs, in a few weeks those items will be found at www.uscis.gov/i-765.

Excerpt from future I-765 Instructions for H-4 EAD:

G. Spouse of an H-1B Nonimmigrant--(c)(26). File Form I-765 along with documentation of your current H-4 admission or extension of stay.  You must also submit documentation establishing either that the H-1B principal has an approved Immigrant Petition for Alien Worker (Form I-140), or that your current H-4 admission or extension of stay was approved pursuant to the principal H-1B nonimmigrant’s admission or extension of stay based on sections 106(a) and (b) of the American Competitiveness in the Twenty-First Century Act (AC21).  For your convenience, you may file Form I-765 with Form I-539, Application to Extend/Change Nonimmigrant Status.  However, USCIS will not process Form I-765 (except filing fees), until after USCIS has adjudicated your Form I-539.  You may also file Form I-765 at the same time as Form I-539 and Form I-129, Petition for a Nonimmigrant Worker.  The 90-day period for adjudicating Applications for Employment Authorization filed together with Form I-539 does not begin until USCIS has determined whether you are eligible for the underlying H-4 nonimmigrant status.  Please see the USCIS Web site at www.uscis.gov/I-765 for the most current information on where to file this benefit request.

1. Proof of Your Status.  You must submit a copy of your current Form I-797 approval notice for Form I-539 or Form I-94 showing your admission as an H-4 nonimmigrant or your most recent approved extension of stay; and

2.  Proof of Relationship to the Principal H-1B.  You must submit a copy of the marriage certificate for you and the principal H-1B nonimmigrant.

b. H-1B Principal Received AC21 106(a) and (b) Extension.  Submit evidence that the principal H-1B nonimmigrant has received an extension of stay under AC21 106(a) and (b). You may show this by submitting copies of the H-1B principal’s passports, prior Forms I-94, and current and prior Forms I-797 for Form I-129.  In addition, please submit evidence to establish one of the following bases for the H-1B extension of stay:

Based on a Pending Form I-140.  If the preference category sought for the principal H-1B spouse does not require a Permanent Labor Certification Application with DOL, submit evidence that the H-1B principal’s Form I-140 was filed at least 365 days prior to the expiration of the six-year limitation of stay and remains pending. You may show this by submitting a copy of the Form I-797 Notice of Receipt for Form I-140.

See our US$60 Attorney Consultation Offer

Go to the Most Recent Immigration Topics

All original material for this blog is provided by James W. Austin, partner in the full-service U.S. immigration law firm of Austin & Ferguson, LLC, and can be forwarded, copied or reproduced freely with proper attribution.

Your Comments and Suggestions are Welcome!